The 49-year-old has given birth to nine children. But they’re not all genetically hers. She has five biological children, aged 13 to 30, and she has been a gestational carrier for four others. She calls the four her “surro-babies,” but doesn’t consider them her children.

“I love those babies, but not the way a mother loves a child,” Harrill said. “You love them, you think of them, but not every day. I think about what they’ll be when they grow up, just like my own kids. I remember their birthdays. But I don’t worry about them, because I know the parents. They were never mine.”

Gestational carriers bring embryos to term that are not genetically their own. The term “surrogate“ is commonly used in place of gestational carrier, but surrogates have genetic connections to the embryo.

The use of gestational carriers is up in recent years. Their numbers increased 13 percent in 2011 from the previous year, according to the most recently available data from the Society of Assisted Reproductive Technologies. The society says totals are up 99 percent since 2004.

Harill was first pregnant as a gestational carrier in 2004 when she was 41. Harrill’s sister-in-law introduced her to a couple unable to conceive, and Harrill says she had no reservations about carrying the child.

END_OF_DOCUMENT_TOKEN_TO_BE_REPLACED

Since her son, 1st Lt. Will Bishop, 24, enlisted, she’s made it her mission to ensure he and the men he serves with are given some reminders of home.

He started Army Ranger training after his University Wisconsin-Madison graduation, and Bishop has been sending packages filled with hundreds of cards, food, toiletries and other items since then. He is now second-in-command of a company with 150 people.

She spends several hours each week preparing the packages, and is prepared for months ahead.

“I don’t worry about me, because I know you’ll take care of me. I’m worried about my men.” she said her son told her before deployment.

Dietsche, his wife and their three chil­dren were less than a half-mile from the site of the explosions when they saw peo­ple rushing down Boylston Street, where the bombings took place, in hysterics.

END_OF_DOCUMENT_TOKEN_TO_BE_REPLACED

ASHWAUBENON — Gov. Scott Walker, on his third stop in two weeks in the Green Bay area, said Thursday that recall-election politics are responsible for the state’s drop in private-sector job creation.

A report from the U.S. Bureau of Labor Statistics released Thursday shows the state is ranked 44th in the nation for creating private-sector jobs. The data, which covers a year-long period that ended in September, shows a recent steady decline. Wisconsin ranked 42nd for the year that ended the previous quarter, and 37th in the quarter before that.

END_OF_DOCUMENT_TOKEN_TO_BE_REPLACED 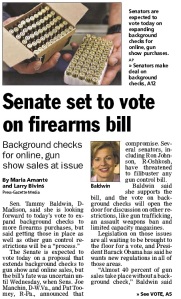 Sen. Tammy Baldwin, D-Madison, said she is looking forward to today’s vote to expand background checks to more firearms purchases, but said getting those in place as well as other gun control restrictions will be a “process.”

The Senate is expected to vote today on a proposal that extends background checks to gun show and online sales, but the bill’s fate was uncertain until Wednesday, when Sens. Joe Manchin, D-W. Va., and Pat Toomey, R-Pa., announced that compromise. Several senators, including Ron Johnson, R-Oshkosh, have threatened to filibuster any gun control bill.

Baldwin said she supports the bill, and the vote on background checks will open the door for discussion on other restrictions, like gun trafficking, an assault weapons ban, and limited capacity magazines.