SQLC’s six CCRCs—the Barrington of Carmel, Buckingham Senior Living, Querencia at Barton Creek, Edgemere, Mirador and Stayton at Museum Way—paid a collective USD 5.98m in management fees as of 31 July in FY17. The fiscal year began 1 January. That’s nearly twice the USD 3.03m paid as of 31 July in FY16, or a 94% increase, according to calculations by Debtwire Municipals based on to data collected from each CCRC’s respective July 2016 and 2017 monthly disclosure packet. 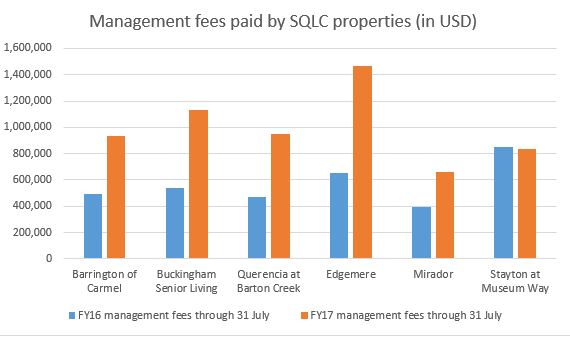 SQLC announced earlier this year the termination of its management agreement with Greystone Communities, which provided management services, financial support, sales, marketing and healthcare consulting at its CCRCs. Those day-to-day community management responsibilities are now handled by Seniority, a company SQLC acquired in June.

“No one’s expressed satisfaction with how this has been handled,” the first bondholder said. “If they don’t fix (the missed covenants) quickly, they’ll need something, but that’s the nature of high yield, and why these conversations are still cordial. Some are clearly stronger than others.”

Many of the SQLC’s communities have missed covenants in the past year, the Mirador just finished restructuring this spring, the first bondholder said.

“We’ll have to wait and see,” the second bondholder said. “I think the transition between Greystone and Seniority may have caused some weakness and switching over management has had some negative effect.”

SQLC communities face staffing issues across the board, and the removal of Greystone as manager could be positive to help stabilize turnover, both bondholders noted.

It’s unlikely the amount collected for management fees will return to previous levels, said Ben Cantrell, SQLC’s CFO, during an investor call for the Barrington on 17 August. Cantrell did not respond to a request to participate in an interview for this story.

“The reason for that is increased oversight, for example, no one paid as much attention to food and beverage (costs) historically,” Cantrell said. “If you’re just looking at the line item …. I wouldn’t expect to see relief there, I hope everyone doesn’t just keep those blinders on. The savings will be seen from P&L [profit and loss], not just the expense side, but also, some room for improvement on revenue, as well as getting occupancy to where they expect them to be.”

Although Greystone is a good developer of start-up CCRCs, as SQLC’s communities mature, it makes some sense for SQLC to move the management functions in-house and take full control of (management) themselves, said Matt Hilliard, vice president with Sit Fixed Income.

“I’ve seen many communities shift managers without cost savings,” Hilliard said. “It may be a control issue, to have a more unified presence across all communities…SQLC understands the challenges (their) communities are facing, so it seems they just felt like they wanted to bring it in-house to have more focus and control.”

A USD 27m tranche of 5% Series 2017A Tarrant County Cultural Education Facilities Finance Corporation retirement facility revenue bonds, tied to the Mirador project, which mature in 2055 last traded in odd lots at 83.406 to yield 6.13% on 5 October, according to Electronic Municipal Market Access.